I don’t understand this Psychology question and need help to study.

Sigmund Freud, an Austrian doctor, was the first person to recognize that the subconscious plays an important role in one’s personality. Conducting research at the turn of the century, Freud became interested in the subconscious after having witnessed experiments in the area of hypnosis. Freud was the first to suggest that the influence of the subconscious came from the repression of painful events in one’s life into the subconscious. These repressed thoughts would then surface in the form of dreams, behavior during hypnosis, and with “slips of the tongue, commonly referred to as “Freudian slips.”

The id is a powerful influence that must be expressed. Conscious sexual urges and the urge to hit someone who is bothering you are examples of the powerful urges of the id. That part of one’s personality that is conscious is the ego. The ego is rational and realistic and must find socially acceptable ways to satisfy the demands of the id.

To show how the id and ego balance each other, use the example of a hungry person. The id would “say” to eat all of the food available while the ego would realize that the person needs food for the future and would have some food available. However, suppose no food were available and the ego began to think about stealing food to satisfy the hunger of the id. Then, the third part of the personality would come into play, the superego or conscience. The superego is designed to “say no” to the demands of the id.

Freud felt that the human personality develops ways of coping with frustrations of having to balance the demands of the three parts of the personality by using defense mechanisms. Freud felt that these mechanisms were necessary for living in society. One has already been discussed. Repression pushes impulses and thoughts into the unconscious. Repression is a kind of forgetting. Displacement is a defense mechanism that gives the id a substitute into a more accessible object. Many readers have evidence of broken objects in their houses or rooms that were broken in a fit of anger. What individual were you really angry at? How about that hole in your wall from a punch when Mom or Dad restricted you in some way? Guess who that wall was a substitute for? Projection is another defense mechanism that allows individuals to assign their own shortcomings to others.

Finally, there is regression, when a person returns to an earlier form of behavior like a temper tantrum or sleeping all the time to avoid the anxiety of daily routines.

Carl Jung was a Swiss Psychiatrist who was a close associate of Freud and who some felt would eventually succeed Freud as the leading spokesman for the Psychoanalytic School. However, Jung became fascinated with religion and primitive cultures and eventually broke away from Freud. Jung felt that man had a “collective unconscious” which he shares with all persons. This collective unconscious is passed down from generation to generation and can be seen by examining symbols and folklore of people throughout the world. Jung called universal symbols that have universal meaning “archetypes.”

Examples of archetypes are the cross, the mandala or “magic circle,” and the story of Jack and the Beanstalk to name just a few. Jung found that all cultures have the cross as a symbol (although not necessarily for Christianity) and that the circle has magical powers and can be found in various religious activities. The story of Jack and the Beanstalk is found throughout the world with different names and circumstances, but all with the idea of the triumph of good over evil or the little guy over the big guy, such as the Biblical story of David and Goliath.

Jung also felt that personality was made up of seemingly opposite or polarities. For example, an introvert (quiet individual) did have characteristics of the extravert (outgoing), but these opposites were generally not expressed. However, each person had the need to achieve wholeness by expressing these opposites. 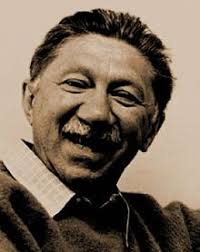 Abraham Maslow is considered the “Father” of Humanism. For Maslow, the study of human personality needs to stress more positive aspects, rather than the animal like instincts of the unconscious (psychoanalysis) and the passive response to stimuli (behaviorism). Human personality study should focus on value, dignity, worth, and potential. Realizing one’s fullest potentials is called self-actualization. 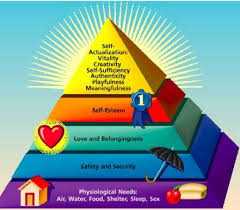 Maslow’s Hierarchy of Needs
Maslow felt that all people want to realize their fullest potentials, but that they generally “bring up” achieving these four deficiency needs. Very few people ever become self-actualized. Maslow included Abraham Lincoln, Henry David Thoreau, Eleanor Roosevelt, and Albert Einstein as examples of people who had the special characteristics of self actualization. 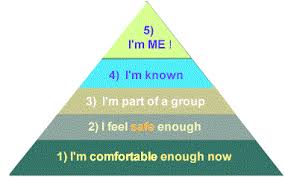 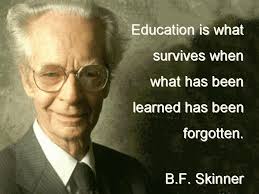 The Behaviorist school feels that freedom, dignity, and self actualization are illusions. They see human personality as something that is learned. They have a completely deterministic approach to explaining personality. This line of thinking is based on the principles of B. F. Skinner.

Directions: Answer each of the following questions.

2. According to Freud, what has the greatest influence on one’s personality? What evidence exists that this influence really exists?

3. According to Freud, what are the three parts of the human personality? What role does each play?

6. According to Jung, what are ‘polarities’ of personality?

7. Who is the father of humanism? How does humanism differ from other personality theories?

8. What is self actualization? Who is most closely associated with that theory?

9. Which of these theories intrigue you the most? Explain your answer.

10. Conduct internet research and identify any other theories of personality research that interests you. Write a summary of the important concepts of that theory and who the major researchers are in that area. Your summary should be at least three paragraphs of 7-9 sentences each. Wikipedia is a good starting point, but you must use other sources besides Wikipedia. Be sure to provide the url of the web pages you cite.

Order a Similar or Custom Paper from our Writers